Welcome to Music Friday when we bring you hit songs with jewelry, gemstones or precious metals in the title or lyrics. Today, Mario tells his new love interest why she deserves a fistful of diamonds and a handful of rings in his 2004 blockbuster hit, “Let Me Love You.” 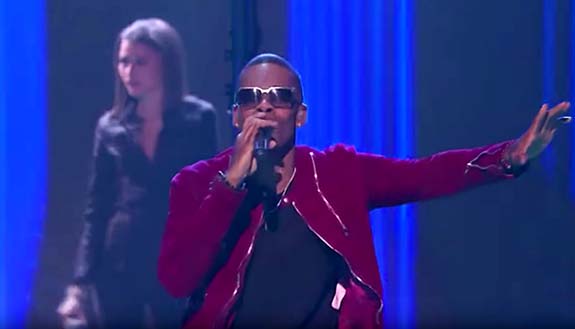 Written by Ne-Yo, Kameron Houff and Scott Storch, “Let Me Love You” is the story of a young woman with relationship problems. She has to choose between a cheating boyfriend who comes home with makeup on his shirt and a sweet-talking suitor who promises to show her the way love’s supposed to be.

Mario sings, “You’re the type of woman (deserves good thangs) / Fistful of diamonds (handful of rings) / Baby you’re a star (I just want to show you, you are).”

The song, which appears on Mario’s second studio album, Turning Point, was an instant hit, as it zoomed to #1 on the U.S. Billboard Hot 100 chart and remained there for nine consecutive weeks. It was also an international hit, charting in 19 countries. Billboard named “Let Me Love You” the eighth most successful single of the decade. It even earned Mario a Grammy award nomination for Best Male R&B Vocal Performance in 2006.

Trivia: Mario’s “Let Me Love You” is one of the top-selling ringtones of all time with 1.6 million downloads.

Mario Dewar Barrett was born in Baltimore in 1986. At age four, Barrett told his family that he wanted to be a singer, and to support his dream, his mother bought him a karaoke machine. At age 11, Barrett signed a record deal after being discovered at a Coppin State College talent show by producer Troy Patterson. Three years later, the talented teen signed a new deal with Clive Davis’ J Records.

Please check out the video of Mario’s duet with Zendaya. The live performance of “Let Me Love You” is from the short-lived television show called Greatest Hits ABC, which ran in the summer of 2016. The lyrics are below if you’d like to sing along…

“Let Me Love You”
Written by Ne-Yo, Kameron Houff and Scott Storch. Performed by Mario, with Zendaya.

Baby I just don’t get it
Do you enjoy being hurt?
I know you smelled the perfume, the make-up on his shirt
You don’t believe his stories
You know that they’re all lies
Bad as you are, you stick around and I just don’t know why

If I was ya man (baby you)
Never worry bout (what I do)
I’d be coming home (back to you)
Every night, doin’ you right
You’re the type of woman (deserves good thangs)
Fistful of diamonds (handful of rings)
Baby you’re a star (I just want to show you, you are)

Listen
Your true beauty’s description
Looks so good that it hurts
You’re a dime plus ninety-nine
And it’s a shame don’t even know what you’re worth
Everywhere you go they stop and stare
‘Cause you’re bad and it shows
From your head to your toes, out of control, baby you know